The Kingston Police Major Crime Unit is asking for the public’s help identifying a male it is looking to speak to in regards to the murders of Nico Joseph Soubliere and Carl Alen Delphin from October 2021.

Police say the images were taken from video footage that was recorded hours before the murders, which occurred in Kingston on October 16 of last year.

Investigators say they have reason to believe that the man was in the company of both victims prior to the murders.

The person of interest is described as a Black man between the ages of 25 and 40, at least six-feet-two-inches tall and approximately 275 pounds. 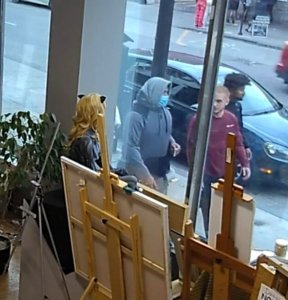 The man they are looking to identify is not a resident of Kingston.

The Major Crime Unit is asking for anyone who may know the identity of this man to contact investigators.