Planning a wedding isn’t easy.  There is so much to do and you want to ensure that your guests have a good time.  For a lot of people, the food is the most important part.  You ask yourself, will they like the food? Will there be enough food for all of your guests?

Here’s a question, what do you do when there isn’t enough food and you are a guest at the wedding?  Perhaps, you take matters into your own hands and order a pizza or four.  When one thinks about a wedding, they might not think pizza.  According to Reddit, one wedding guest took it upon himself to order a few pizzas.

In his post, he said: “I was a groomsman for my friend Sara’s wedding this past week. I’m on medication that has to be taken at a certain time of the day and also requires food, so I asked Sara what time the food would be served.

“Now, this is a vegetarian wedding. I’m not vegetarian but I have no problem not eating meat for a meal especially when it comes to supporting my friend. The only issue I had was when I found out the size of the meals. The entire course consisted of a side salad, a side of corn, and a side of broccoli.”

“If this were only for a few hours that wouldn’t be a problem, but because the wedding party has to arrive before everyone, the whole event was going to be over 8 hours and I knew there was no way a small salad and a few tablespoons of corn and broccoli were going to hold me over. When Sara told me what they were serving I said something like, ‘Oh will there be another entre?’ and she immediately got defensive so I hushed myself before causing any further tensions.

“Normally I would have been straightforward about all this, but I could see she was already stressed and I didn’t want to add to it, so I decided during the reception dinner that I was going to covertly order a pizza, meet the guy outside, and just sneak in and out here and there to grab a few slices from my car.”

His plan got out of hand when he told another friend what he was doing, word began to spread to the rest of the wedding party, who were also hungry.  So everyone was outside enjoying a slice.

He ordered four large pizzas, and the bride found out when she spotted the groom himself snacking on a slice by the man’s car. Uh oh!

When the bride found out, she was upset. Ekkkk!  “To say she blew up was an understatement. She said I embarrassed her, and made her feel cheap. I tried to apologise and explain the situation, but she was having none of it. She told me to leave while her mum stared daggers at me.” 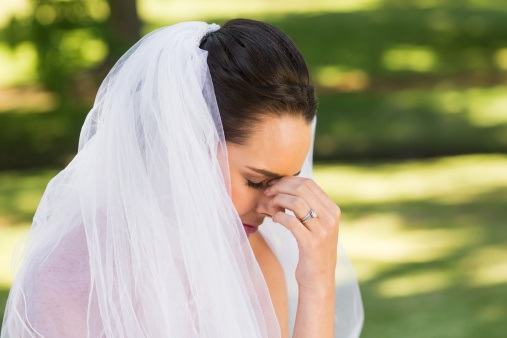 Was he in the wrong?  Many of the commenters on Reddit, were on his side.