With COVID-19 rates continuing to reach record highs in the KFL&A region, many are wondering why cases have spiked so dramatically in the area now, when vaccination rates are also high.

As of Wednesday, the health unit was recording 234 active cases of the virus, the highest it’s ever been since the beginning of the pandemic. Two people have died from the virus this week, a death rate never before seen locally.

Medical officer of health Dr. Piotr Oglaza is not available to be interviewed on the matter until Friday, but spoke at length about probable causes for the region’s high case counts at a board of health meeting Wednesday.

Oglaza noted that KFL&A may now be a victim of its own previous successes at avoiding high transmission over the course of the pandemic.

“When we had significant spread in other jurisdictions in Ontario during the third wave, we were still relatively spared in that time,” Oglaza said.

Although Kingston would see ups and downs in case counts, hospitalizations and the local death toll remained low, so much so that Kingston hospitals became a major intake point for other regions struggling to keep up with intensive care patients.

Oglaza said although vaccination rates are high in KFL&A, there are still about 43,000 people unvaccinated. So far, more than 87 per cent of those 12 and over are double-dosed, but this number only accounts for those eligible to be vaccinated, which amounts to about 165,000 people.

“Because we were still relatively spared during all the previous waves, the vast majority of those 43,000 people who are not yet immunized would have never come in contact with the virus, and that’s now the population from which this fourth wave is drawing,” he said.

Oglaza said natural immunity is not as effective as vaccine immunity, but the lack of that added protection may be affecting how the virus spreads within the unvaccinated population in the Kingston area.

Other factors that may be adding to the additional spread during Kingston’s fourth wave, in comparison with the third, may be the lack of restrictions currently in place.

“During the third wave, most of the province stayed in lockdown mode. There was a state of emergency,” he said.

Currently, the vast majority of the vaccinated population is interacting with more than 40,000 unvaccinated people, which could be contributing to the recent spread.

Coun. Mary Rita Holland, who sits on the board of health, asked the medical officer of health whether additional restrictions should be put in place if Kingston has the unique situation of having less natural immunity.

Oglaza agreed, but said it’s finding what kind of restrictions will be beneficial that could be a challenge.

So far, the majority of the spread has been found in private settings, mainly single households. About 50 per cent of local cases are being transmitted through close contacts.

With children 11 and under unvaccinated, cases have been rising among that population, as have school outbreaks.

Just this week, the health unit implemented additional measures that target school-aged children, which included an expanded symptoms list for school screening and a vaccination requirement for indoor sports for those 12 to 17.

For those wondering why community-wide restrictions are not being implemented to curb further spread, Oglaza said such measures wouldn’t necessarily be effective.

“When there is masking and there’s measures in place, where they are currently screening, masking, proof of vaccination, we don’t see significant spread happening from those settings,” he said.

He said his focus is now turning to how to curtail the spread in private settings, rather than to add what he would see as ineffective capacity limits on places like restaurants, where transmission is low.

“It would not be getting at the root of the problem, which is spread in settings that are not regulated. So that’s really the avenue in which we will be we’ll be proceeding,” he said.

The upside is, for Oglaza, that measures like vaccine certificates and masking do work. What’s left is how to tackle spread within households, especially with the holidays on the horizon.

He said that gathering over the holidays will be a risk, especially for those with pre-existing conditions.

“Unfortunately, even if they are immunized, some individuals may not fully benefit from vaccine based on their other health status, and they should be very careful this time of year,” he said.

The medical officer of health presented data of case rates among the vaccinated and the unvaccinated in Ontario over from Sept. 30 to Oct. 29.

But Oglaza noted that for those over 80 who have significant health conditions, even vaccinations can’t necessarily prevent death from COVID-19.

“Even if they are fully vaccinated, if they get sick, if they are hospitalized, they certainly may not make it. And that’s really the sad reality of any kind of infection pathogen and limitation of what we can accomplish with vaccine in very frail individuals,” he said. 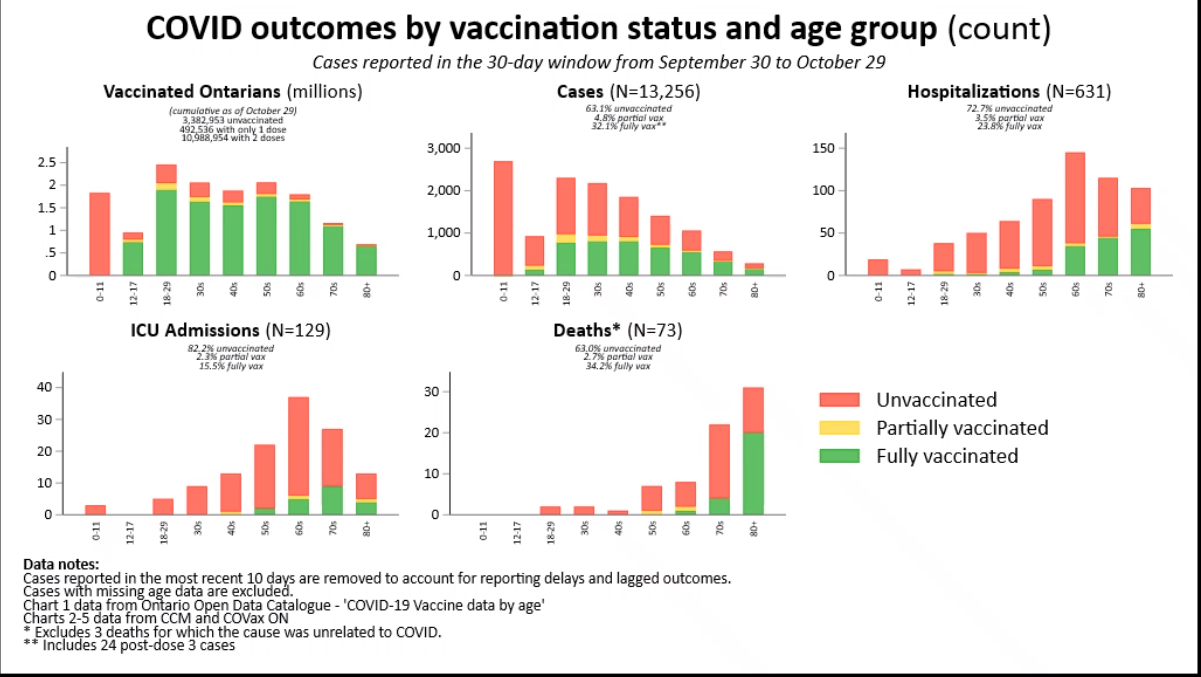 With those warnings in hand, Oglaza asked the community to be extra vigilant as the holidays approach. Still, he stopped short of mentioning any other restrictions that may come into effect locally during the call.

Rather, he advocated vaccinations for anyone who may be eligible, especially the newly approved five to 11 age bracket.