Anthony Farnell GlobalNews.ca
October 26, 2021  5:00 am
WATCH ABOVE: Fall will quickly transition to winter as cold and snowy weather makes an early appearance this year. Global News chief meteorologist Anthony Farnell explains how a second year La Niña could play a significant role in the weather patterns across Canada in his annual winter forecast.

We are releasing our winter weather forecast earlier this year and for good reason. The seasons are changing in a hurry and we are predicting an early and possibly severe start to the winter, especially across central and eastern Canada.

For the second year in a row, La Niña is developing in the Pacific Ocean.

These colder than normal water temperatures often reappear for a second year with eight of the 12 La Niña episodes since 1950 being a “double dip.”

La Niña’s impact on the mid-latitude jet stream can play an important role in the weather pattern across Canada. 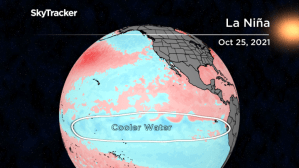 As with any seasonal forecast, we are playing a probability game and right now cards are stacked for colder than normal and snowy conditions in the west and a milder set up in the east, but with an active storm track bringing lots of snow and rain. Let’s take a closer look at how we see the winter unfolding across the country:

It’s been a very mild first half of fall, but temperatures will tumble later in November and December along with early winter snow.

Water temperatures remain well above normal off the east coast and this will likely help ridging establish itself during the heart of winter.

Significant thaws in January and February will provide some moderation from the early onslaught as the active storm track shifts back west into Quebec.

This still puts New Brunswick in a very snowy pattern with some similarities to the historic winter of 2007-2008.

An early onslaught of cold and snow will be aided by the relatively mild Great Lakes.

The incredible warmth earlier this fall means water temperatures are running anywhere from three to five degrees above normal.

This may initially moderate the Arctic chill, but it will also create the ideal setup for lake effect snow in November and December.

Like last winter, the quick start won’t last. Significant thaws are expected in January and February with above-normal rainfall. 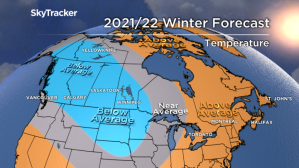 These storms will also contain significant snow which is typical with La Niña. Yes, It is possible to have above-normal temperatures AND snowfall in the middle of winter.

March will likely shift colder than average again, prolonging the workload for those busy snowplow operators.

I’m expecting some great skiing and boarding conditions during the holidays, but resorts will have trouble with the freeze-thaw cycles mid-season.

The mildest month in relation to average will be December.

Unfortunately, La Niña winters often turn brutally cold for a time in the Prairies and this year will be no exception.

January and February look especially frigid in Alberta and Saskatchewan.

With the typical jet position taking storms from Alaska to Montana, snow will be plentiful. Further east in Manitoba, it’s still looking like a cold winter but perhaps less severe than further west with near-normal snowfall. 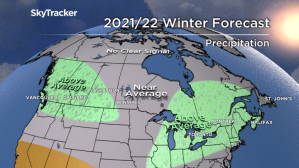 The recent onslaught of storms in British Columbia is very common during La Niña but it doesn’t mean it will continue all winter long.

In fact, while the eastern half of Canada turns cold and snowy early, it may end up relatively mild and calm out west through early December.

The jet stream will settle back south later in the season and bring with it a new series of storms.

Heavy coastal rains will return, but also mountain snow that will pile up well into March making for a long and solid ski season for the resorts that desperately need a good winter. 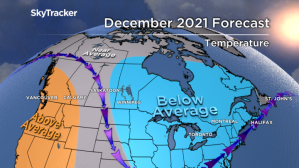 There are early signs that blocking will once again play a significant role in the winter weather across the northern hemisphere.

These “blocking” episodes have become more common in part due to reduced sea ice and other factors associated with climate change.

When warm air gets trapped near the pole, the polar vortex is displaced south and can cause crazy weather and prolonged hardship for areas that don’t typically see it. Think Texas last February.

The coldest temperatures will be felt across Yukon and the Northwest Territories this winter.

Nunavut will likely see plenty of back and forth depending on the strength of the blocking episodes near Greenland.