The two Game of Thrones stars famously shared an on-screen relationship as Jon Snow, future King of the North, and the Wildling Ygritte. Both actors are 30 years old.

Harington and Leslie have confirmed their engagement – with a very traditional announcement. 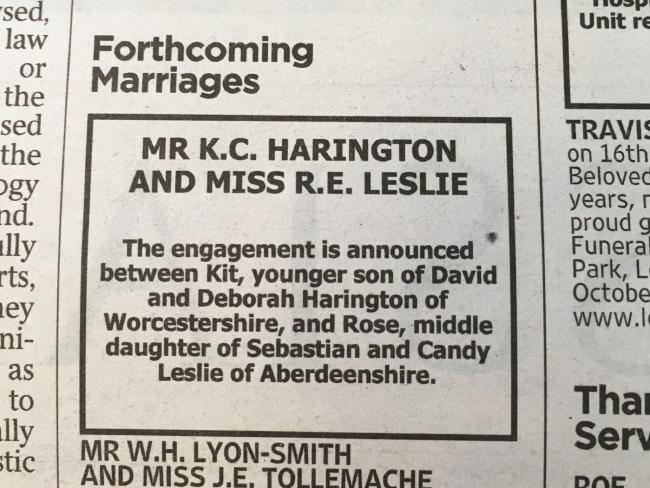 The English actor and Scottish actress first dated in 2012 before splitting one year later. The two have since reconciled and officially confirmed their relationship in April 2016 on the Olivier Awards red carpet.

Harington previously told L’Uomo Vogue how easy it was to fall in love with Leslie while shooting scenes for season two of GoT in London. “Because the country is beautiful, because the Northern Lights are magical, and because it was there that I fell in love,” he said in 2016.

“If you’re already attracted to someone, and then they play your love interest in the show, it becomes very easy to fall in love,” Harington explained.

In 2014, Leslie dished on what it was like doing her first-ever sex scene with Harington. “It was my first sex scene that I’ve ever done and it was weird,” she admitted to People. “But I felt that it was important for the characters and the audience to get to see just how much they have fallen in love.”

“We got to see them in their own little world, with no outside interests or power plays or nasty surprises,” Leslie continued. “It was just two characters finally getting together.”

And their off-screen chemistry definitely helped. “Kit is a lovely and funny man, and a dear friend,” she said years before their reported engagement. “We had known each other before we started working together on Game of Thrones. It was always such a privilege to be working opposite him and such a blessing that we get on in real life because it made our characters more believable.”

In a wild turn of events, Nicole Kidman might have predicted the couple’s next step back in June on The Late Late Show with James Corden when she “pressured” Harington about whether he was going to pop the question. Watch below.

ET Canada has reached out to both Harington and Leslie’s publicists for confirmation.